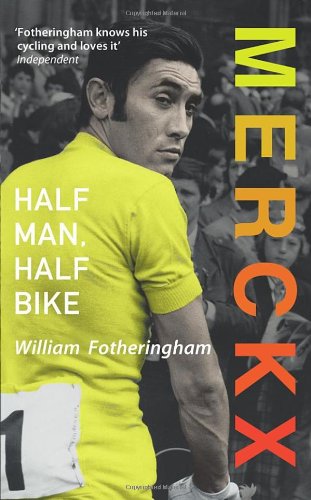 Merckx: Half Man, Half Bike

Eddy Merckx is to cycling what Muhammad Ali is to boxing or Pele to football: quite simply, the best there has ever been.Throughout his professional career Merckx amassed an astonishing 445 victories. Lance Armstrong, by comparison, managed fewer than 100. Merckx was a machine. It wasn`t just the number of victories; it was his remorseless domination that created the legend. In 1969 while already comfortably leading the Tour de France, Merckx hammered a further eight-and-a-half minutes out of his nearest rivals during an 85-mile solo break in the Pyrenees. He didn`t just beat his opponents, he crushed them.But his triumphs only tell half a story that includes horrific injury, a doping controversy and tragedy. He was nicknamed `The Cannibal` for his insatiable appetite for victory, but the moniker did scant justice to a man who was handsome, sensitive and surprisingly anxious.For Britain`s leading cycling writer, William Fotheringham, the burning question remains, why? What made Eddy Merckx so invincible? In Half Man, Half Bike, Fotheringham goes back to speak to those who were there at the time and those who knew Merckx best. The result is this extraordinary and definitive story of a man whose fear of failure would drive him to reach the highest pinnacles before ultimately destroying him.